A man was carried out of Hove Town Hall by security guards and 10-20 others were escorted from the building this evening after protesting against Nigel Farage.

More protesters were outside shouting chants such as ‘shame on you’ at people going in to listen to a talk being given by Mr. Farage, leader of the UK Independence Party (UKIP).

Nadia and Eli Edmonds, mother and daughter respectively, from Unite Against Fascism (UAF), helped to organise the protest.

Nadia Edmonds estimated there were over 100 people at the protest, calling it “a really loud demonstration of anti-UKIP feeling.”

She said they while they mainly targeted the English Defence League and the British Nationalist Party they were concerned that members of the EDL were turning to UKIP and that the party was providing a legitimate platform for views held by the EDL and BNP.

People from UNISON, Sussex University, Brighton Queers Against the Cuts and other groups were also present.

Flyers explaining the ‘Stand up to UKIP’ protest that quoted Mr. Farage and other members of UKIP were handed out, the same information can also be read online.

Mr. Farage’s talk was scheduled to start at 7pm and around 7.30pm protesters who had gone inside to protest were brought out. 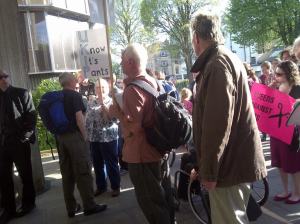 One thought on “Protesters forced to leave Nigel Farage talk”